Skip to content
Things To Do In Barcelona / Attractions / Casa Milà

Casa Milà, also known colloquially as La Pedrera, is one of Barcelona’s can’t-miss attractions. Designed by famed architect Antoni Gaudí, its characteristic stone facade has become one of the symbols of the Catalan capital.

On this page you’ll find:

What is the Casa Milà and why should you visit it?

Architecture lovers consider Casa Milà a masterpiece. It’s one of the two houses that Antoni Gaudí designed on Passeig de Gràcia, the other being the Casa Batlló.

The building was commissioned by Roser Segimon and her husband Pere Milà, wealthy local socialites and business owners.

At the time of its construction, Casa Milà’s style was so unorthodox that it earned the nickname ‘La Pedrera’ (The Quarry), a reference to its unique facade built entirely of natural stone.

At first the Milàs and Gaudí were teased for this, but in time condescension turned to appreciation and it became the local icon it is today.

A visit to Casa Milà

Casa Milà is quite large and even though you won’t visit the entire building, it’s normal to spend up to two hours exploring its many areas.

Make sure to stop by the Espai Gaudí to learn more about the famous architect’s process and his philosophy.

When is the best time to visit Casa Milà?

Casa Milà is one of Barcelona’s most popular attractions and as such it’s hardly ever empty. That said, there are certain dates and times that are better for visiting than others.

As with most tourist attractions, it is most busy on weekends and late in the morning.

Therefore, if you want to avoid the largest crowds, your best bet is to go on a week day and very early, right when it opens, or late, close to closing time.

If you decide on the latter, make sure you budget enough time to see it all comfortably, so at least one hour and preferably a bit more.

During the summer months it’s not recommended to go during the warm hours in the middle of the day, as it can get quite hot on the roof terrace.

You can also go on a night tour of La Pedrera. The price is a bit higher, but if you want a truly unique experience it is definitely worth it.

The view from the rooftop at night is spectacular, and you’ll get to enjoy a light show and a sip a glass of cava too.

Because the lines are often very long, we recommend you buy your tickets online in advance.

If you prefer to buy your tickets at the gate, make sure you get there as early as possible, there is often a line already half an hour before opening time.

If you buy your tickets in advance you can skip the line. There are several tickets to choose from with discounts for children, students and seniors (65+).

Children under 7 enter for free.

Note: La Pedrera has time slots, which means that when you book your ticket you’ll have to choose the time of your visit. You can print your tickets or save them on your smartphone.

During the daytime, last entrance is 30 minutes before closing time, but make sure to arrive earlier or you won’t have enough time for your visit.

How to get to Casa Mila

Casa Milà’s address is Carrer Provença, 261-265, 08008 Barcelona, Spain. The building is located on the corner of Provença and Paseo de Gracia.

What to see and do during your visit to La Pedrera?

To admire the front of the house you don’t need an entrance ticket, but you’ll be missing out on the most interesting parts if you don’t visit the interior.

Inside, you’ll get to visit one of the nine furnished apartments, several exhibits including the Espai Gaudí, which hosts a permanent collection on the architect’s work, the inner patios, and of course the spectacular rooftop with its sculpted chimneys and towers.

Casa Milà rises an impressive 8 stories from the sidewalk of Paseo de Gracia.

The facade, built from massive blocks of carved brown limestone, is said to evoke the sea through its smooth, curved forms.

The heavy front of the building is supported by massive stone pillars all along its perimeter, which allowed Gaudí to add dozens of windows to brighten the interior as much as possible.

While Gaudí’s work remains polarizing today due to his extravagant style, at the time of its construction the reaction to Casa Milà was outright negative.

Locals referred to the building as “La Pedrera” (The Quarry) because of its strange appearance. It wasn’t until many years later that appreciation for it grew, and the nickname lost its teasing tone.

When you visit La Pedrera you will get a chance to peek into the lives of the wealthy bourgeoisie in Barcelona at the beginning of the 20th century.

The interior of Casa Milà has been conserved exactly like the houses from back then. In the apartments you’ll find furniture from the early 20th century, as well as many ornaments and pieces designed by Gaudí himself.

On the fourth floor you can watch an audiovisual presentation about Barcelona and the rapid changes of those times.

Did you know that there are still people living in the building? As of now, 4 apartments are still occupied.

In La Pedrera, Gaudí proved himself an innovator by grouping the typically numerous small ventilation shafts that buildings had at the time into two large patios, so as to ensure better lighting and ventilation for the inside of the building.

The walls of these two patios are a spectacle of shapes, lights, and colors, coming from their many windows and the wall paintings that decorate the walls.

These feature floral motives that mirror those on the walls and ceilings ceilings of the entrance halls and the stairways.

The roof is one of the most interesting parts of Casa Milà, it features 28 chimneys plus multiple towers and spires, and it is decorated with Gaudí’s signature trencadís, mosaics made with shattered pieces of multi-colored tiles.

Take a look at the dark green ornamentation on some towers, made of fragments of green glass from cava bottles.

On one of the chimneys you can spot a heart that points into the direction of Reus, the city where Gaudí was born.

On a different chimney there is a heart and a tear, pointing at La Sagrada Família. According to some, the tear symbolizes the sadness of Gaudí because he knew he would never complete his beloved church.

From the rooftop terrace of La Pedrera you can enjoy one of Barcelona’s finest views.

The ‘Gaudí Space’ is located in the attic, one of the most interesting rooms of La Pedrera.

Originally this space housed laundry and cleaning facilities where the residents’ servants worked.

Now it is occupied by the only existing exhibit dedicated to the life and work of Gaudí, presenting his life’s work through models, building plans, objects, designs, photos, and videos.

In 1992 the first floor was opened as an exhibition space. At the beginning of the previous century this was the apartment of the Milà family, the owners of the building.

Some of them reproduce the typical trencadís of Gaudí. Exhibits are often open (free) to the public.

Also on the first floor you’ll find Café La Pedrera, where you can go for a coffee and something to eat after your visit.

You don’t need a ticket to enter the café, so even if you’re not visiting La Pedrera it can be a nice place to stop for a coffee.

If you want a souvenir of your visit or are looking for a gift, you’ll surely be able to find something interesting at Casa Milà’s gift shop or at the book shop.

History and architecture of Casa Milà

The gossip around town was that Pere married Roser for her fortune.

Milà was deeply impressed by the flamboyant Casa Batlló, also by Gaudí and located only a few blocks away.

Gaudí received a blank check and complete creative freedom, but it didn’t take very long before this caused severe conflicts between him and Milà, leading to him eventually abandoning the project before its completion. 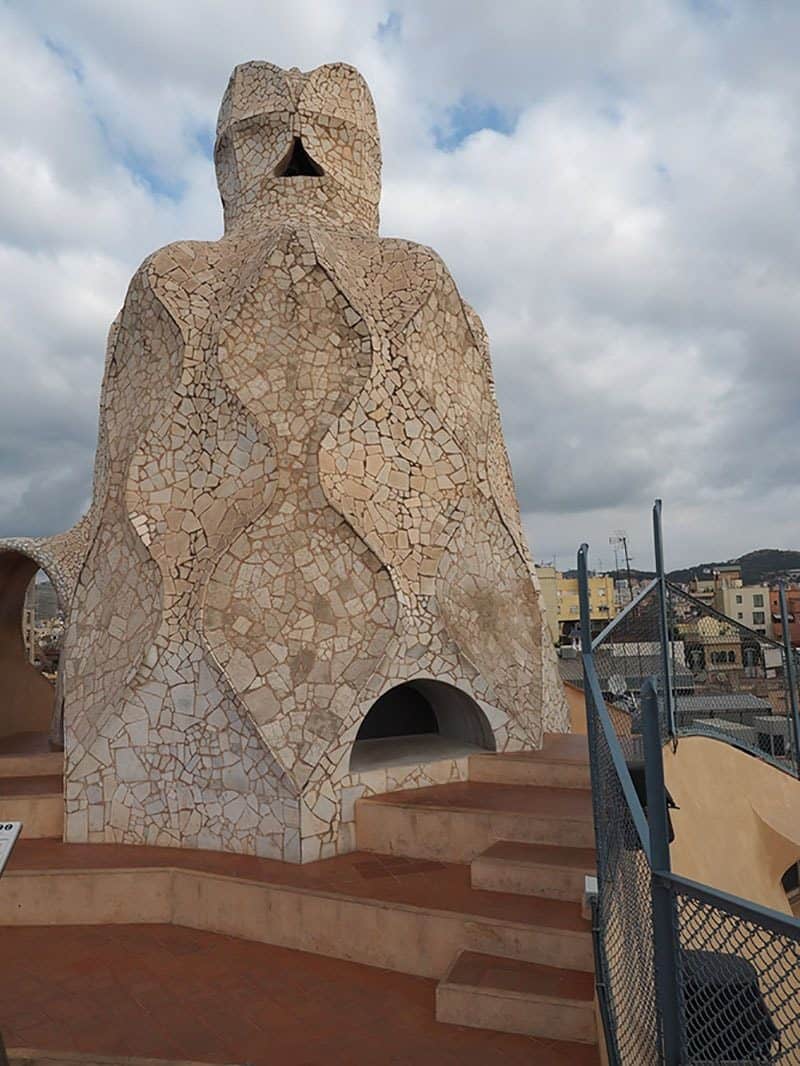 Sadly, Milà’s admiration for Gaudí’s architecture wasn’t shared by everybody.

Throughout his life, Gaudí’s work was misunderstood and thought to be odd and strange. It wouldn’t garner acclaim until his death.

When La Pedrera was finished in 1912 there was a wave of negative backlash. People feared his strange building would lower the value of the neighboring properties on Passeig de Gracia.

In 1910, Gaudí got into a fight with Milà around the religious symbolism of the building.

Gaudí was a highly devout Catholic, and he wanted to place a hollow with the Virgin Mary on the front of Casa Milà.

Barcelona was going through an intensely anti-clerical period at the time, so Milà refused. This frustrated Gaudí to no end, to the point that he abandoned the project.

The Casa Milà would be completed without him, and from then on he would dedicate himself completely to the construction of the Sagrada Familia.

This situation also generated a contract dispute between Gaudí and Milà, who refused to pay his former architect’s salary.

Gaudí sued in court –with the support of an interpreter, because he refused to speak in any other language but Catalan– and won.

Milà was forced to take out a mortgage on the building and pay Gaudí no less than 105,000 pesetas, a small fortune at the time.

In 1984, Casa Milà was recognized as a UNESCO Cultural World Heritage site, together with Gaudí’s other famous works Casa Batlló, La Sagrada Familia, the Park Güel, and Palau Güell.

After that, in 1986, Caixa Catalunya, which owned the building at the time, invested the equivalent of over 50 million euros in renovating it and turning into a modern tourist attraction.

These events contributed to the change in public perception of the building and brought it closer to being considered the icon it is today.

In 2014, the Fundació Catalunya-La Pedrera initiated a huge renovation of Casa Milà. The entire facade was cleaned and repaired, stone by stone.

When it was finished it was proudly presented to the public.

You can see a video of the process here:

Which Gaudí house should you visit: Casa Milà versus Casa Batlló?

If you want to visit only one of the Gaudí houses on Passeig de Gràcia (Milà or Batlló), we recommend you visit Casa Milà.

From the outside, Casa Batlló looks more spectacular (especially to children), but we feel that Casa Milà is the more interesting of the two to actually visit.

Casa Milà is close to two of Gaudí’s famous buildings:

Casa Milà is located on Passeig de Gracia, and as such is surrounded by some of the best hotels in the entire city. All the hotels in the area are high quality, so it’s hard to go wrong with your choice. Here are two of the best:

¡Hola! We’re Annebeth, Carola and Carlijn. We live and work in Barcelona as journalists and tour guides, and we want to share the best this wonderful city has to offer.